Maurice Fatio trained in Switzerland and began his practice in New York. In the 1920s he was voted the most important architect in New York. His largest body of work is in Palm Beach and in Long Island where he built estate homes for society patrons and business tycoons. 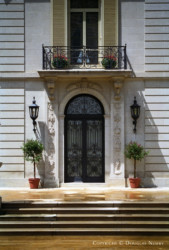 This Preston Hollow estate home was the most important home designed in Dallas in the first half of the twentieth century. The Crespi Estate was designed by Maurice Fatio in 1939. Maurice Fatio and William Treanor were voted the most popular architects by their peers in New York in the 1920s. Maurice Fatio came from a prominent family in Switzerland and was trained in a classical tradition. His classical elements and proportions were more subtle than the architectural exuberance of Addison Mizner who preceded him in Palm Beach. His skill was further demonstrated when he went beyond designing estate mansions and designed a Moderne house in Palm Beach that received the Paris Medal of Honor in 1937. Better Homes and Gardens awarded him the top honor for a proposed suburban home. Whether the designs were for small or large homes, they reflected a graciousness, perfect proportion and exquisite detail.

In the late 1930s, when the building of mansions across the country came to an abrupt halt, Maurice Fatio received a request to design an important home in Dallas for Pio and Florence Crespi. Pio Crespi came from a very prominent Italian family, and as the youngest son was sent to Dallas to trade cotton. While his brothers all had 30,000 and 40,000 square foot homes, he thought a 12,000 square foot home would be less ostentatious for Dallas. On Walnut Hill, they then purchased 25 acres and built this magnificent French chateau-styled home situated on a north-south axis in front of the creek. The height of the home exceeds current municipal height restrictions. The added height allows for 14 foot ceilings on the first floor, 12 foot ceilings on the second floor and a full third floor. The verticality of the home adds drama to the wide marble stairs. The ceiling molding is all hand carved with visible chisel marks. The home is designed to allow breezes to come across the creek throughout the house. 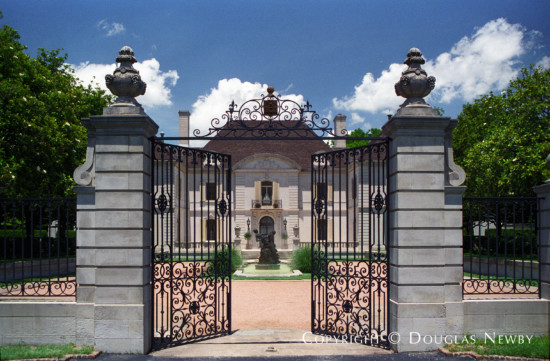 Flourishes of Art Deco are seen in the home in a series of hall chandeliers, the dining room fireplace and most prominently in the painted mirrored bar, evoking images of an ocean liner, the preferred means for the Crespi frequent travels. This home is the last great estate home built in the country for this generation. Florence Crespi lived in the home beyond her 100th birthday. It had been closed to the public for the last 20 years of her life, but was opened briefly for a reception honoring Jimmy Stewart when he received the USA Film Festival Award and for President Reagan when he came through Dallas on his presidential campaign. The last great event of the Crespi Estate was a reception for the American Institute of Architects Dallas Chapter, celebrating their 50th anniversary by honoring Dallas, 50 Significant Homes. The staff, led by Orville Pate, who had overseen the house and gardens for 55 years, prepared the property of raked stone paths and blooming magnolias for this last celebration. Reflecting the original design, architect Peter Marino meticulously restored and expanded the home for his clients. Magnolias can still be cut from the master bedroom balcony.

The third floor, originally designed for servants and a sewing room, has been made into proper bedrooms. The original Indiana limestone, brought in by rail where now lies the North Dallas Tollway, and the exquisitely carved stone detail have been cleaned and refurbished. Bill Booziotis, FAIA, has commented, "You would have to go to the seventeenth and eighteenth century to find the quality you find here."

Estate homes are now being built with more square footage. This home is useful to see how opulent a home can be when it incorporates the finest proportions, details and materials. Here is a home that is refined, graceful and inviting. 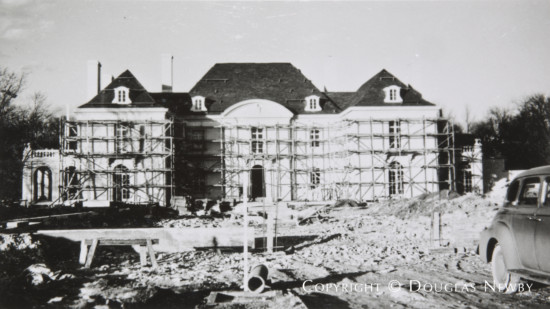 Photographs of the Original Crespi Estate 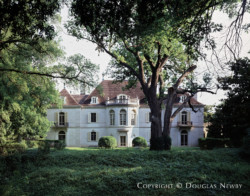 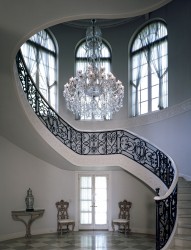 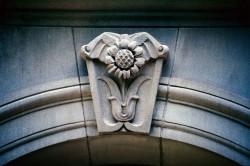 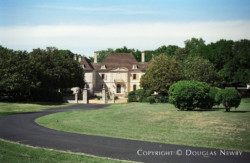