Arch Swank, one of the most accomplished modern architects in the 1950s, designed this architecturally significant modern home in 1957 in Highland North neighborhood located west of Midway Road. The architect was adept at siting the modern homes he designed on the most attractive land. 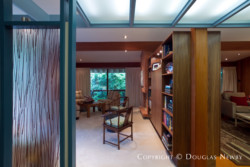 Arch Swank had the ability to incorporate the topography and create contemporary houses that embrace the nature around them. One sees examples of this at the early modern home he designed on 3514 Rock Creek Drive and this midcentury modern home on Crittendon Drive. 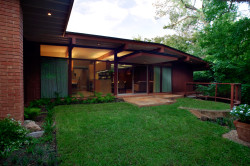 John B. Cole received one of the largest land grants and along with the Caruth family were the largest landowners in Dallas. The Cole family kept the land that was developed as the Highland North neighborhood. From this cherished land they selected the best acre of land for the site for architect Arch Swank to design this modern home during the midcentury.

Modern Architects Are Attracted to the Best Sites

The best architecturally significant homes are invariably found on the best sites.  Modern architects either help select the site for their design or they are attracted to a project because they are working with a great piece of land.

Architect Arch Swank was attracted to the topographical splendor of this untouched and, as yet, undeveloped land owned by the descendants of the Cole family.  He also helped define the one-acre boundaries of the site for the modern home he was designing.  One of the owners had grown up visiting the family land as a little girl for Sunday picnics above the creek and for playing in the forest.  This intimate knowledge of the land, its terrain, and its trees provided another impetus for siting the house perfectly to take advantage of the views, paths, footbridges and gardens. 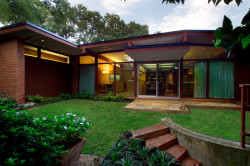 Full-length windows and doors invite you outdoors.  The porches and balconies propel you further into nature.  Steps to wooden footbridges lead you to the forested paths and steep decline to the wide spring-fed creek below. 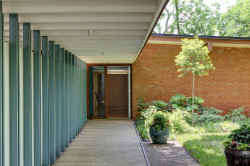 The 1950s are often associated with wide suburban lawns and flowering gardens that surround an open carport, celebrating the emerging car culture.  This Arch Swank, FAIA-designed home has these midcentury modern design elements.  It also has a protected courtyard terrace often seen in midcentury homes.  The sleekness of midcentury modern design is accentuated by the organic chaos of the dense woods and steep terrain surrounding two sides of the home. 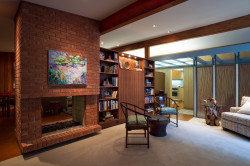 Birch cabinets, American walnut, and cork floors combine with the redwood to create a midcentury palette of materials.  A suspended horizontal frame creates an overhead architectural element defining ribbons of circulation and open corridors through the house. 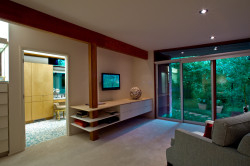 Cliff Welch redrew the original detail to be better understood by contemporary craftsmen.  He also took advantage of contemporary technology to further the modernity of the home.  Track lighting was replaced with recessed lighting.  Original glass doors and windows were replaced with Arcadia doors and windows.  Cliff Welch also expanded the master bedroom, pushing the exterior wall further into the forest and preserving the original view of the creek below.

Modern Amenities in a Modern Home 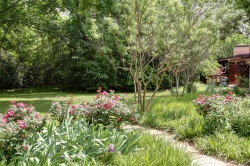 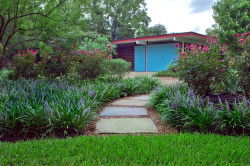 On the opposite end of the sweeping circular drive is a secondary carport and garden structure designed by Cliff Welch in a midcentury style, creating the sense it is an original structure. It provides additional architectural interest to the original home.

Two accomplished modern architects sequentially created, preserved and enhanced a modern masterpiece from the midcentury.  Dallas is fortunate to have such talent and this modern architecture in the city. 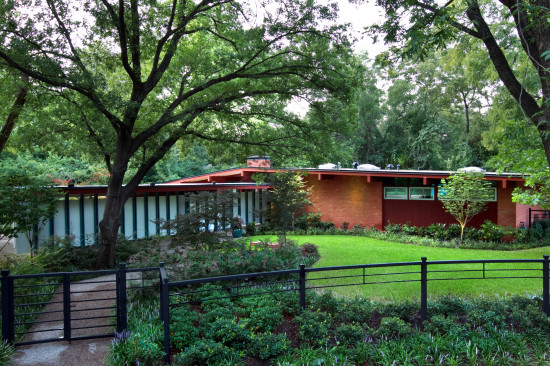 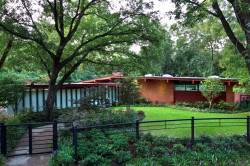