Below is the article that first identified where President George Bush and Mrs. Bush bought a home in Dallas. The article first appeared on the Dallas Architecture Blog of Douglas Newby. Within hours and days of this article by Douglas Newby being published, bloggers, journalist, and other media picked up the story and reconfirmed that this indeed is where President Bush and Mrs. Bush purchased their home on Daria Place in Dallas. It is cute to see real estate bloggers on their home page claim to have broken the story when all they did was read my article identifying the home President Bush purchased. This is just one example of Douglas Newby having an understanding and an insight of the real estate market that no one else has. 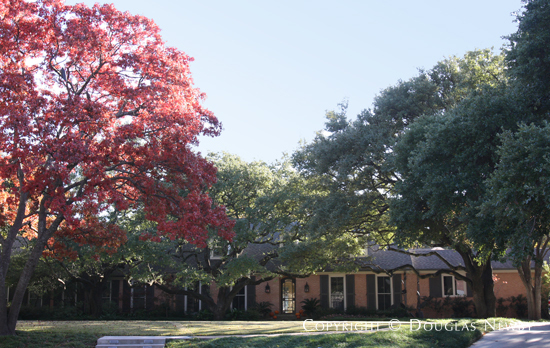 As a real estate broker in Dallas, Texas, the question inevitably comes up, where are the president and first lady buying a home in Dallas?  More often the question comes in the form of “Is it true the President and Mrs. Bush have purchased a specific property?” and then they state the location of a mansion or an incredibly expensive lot.  Often, any question gives way to a statement:  “I understand the Bush's are moving to such and such house.”  Their confidence in the specific location of the President’s new home comes from knowing people in high places or from a Realtor or from what they have read or heard.  For several years, I have commented that I had no idea where President and Mrs. Bush will be moving, but have mentioned I did not think the rumor of the moment was accurate because the President and Mrs. Bush had not started looking for a house yet.

In September the search became much more public with the President and First Lady mentioning they were actively looking for a house in Dallas.  The inquiries I received from the local and national media became more frequent.  I have continued to dispel rumors that did not seem likely, always with the caveat that I have never asked the President or First Lady or any of their friends or any officials in high places which home they might purchase.  More important, no one has told me which house they are buying.  So my thoughts on their next house is just based on President and Mrs. Bush’s public comments and my knowledge of the real estate market in Highland Park and Preston Hollow.

Why the Above Preston Hollow Home Could be the Next One for President and Mrs. Bush

The casual photograph of the home above is the type of home that would fit the above criteria.  On a secluded street the home is attractive in an understated way.  It is between 4,800 and 5,800 square feet on a standard size estate lot, so it is substantial but not in any way ostentatious.  In fact, it would be one of the smaller homes in the estate area.

As many Preston Hollow homes, this home also enjoys a separate living area and quarters linked to the garage and house which might be convenient for the Secret Service.  The home also enjoys the benefit of large estate properties in close proximity increasing privacy and is also close to a modestly priced home that most likely will end up being purchased and used for the Secret Service.

In the last six months this home appraised for approximately $2.6 million which would make it on the low end of the home prices in the estate area.  This particular house has been cleverly renovated, introducing a more contemporary aesthetic, making it perfect for the President and Mrs. Bush’s art collection and yet it has traditional lines that create a pleasing environment for antiques.

My discussion of this home is only as a point of reference for discussing what type of home President and Mrs. Bush have purchased in Dallas.  I am confident that wherever they move to in Dallas they will be greeted warmly and make a great contribution to the city.

The finest estate homes in Dallas are located in Mayflower Estates. Here there are also spectacular Texas modern homes sited on creeks and small lakes.

What a wonderful surprise when you discover a small hidden neighborhood with the largest estate properties and most distinguished and architecturally significant homes on creeks and small lakes that are designed by prominent architects including Maurice Fatio, Peter Marino, Scott Lyons, Wilson Fuqua, Cole Smith, and Max Sandfield.

Call Douglas Newby if you are interested in Dallas insights, the real estate market, and having Douglas Newby represent you as a client for selling or acquiring Dallas estate homes, architect designed homes or modern homes.