Dallas is a city that attracted people, ideas, and styles from across the country and from around the world. Thus the Dallas architectural family tree is firmly rooted in an eclectic expression, a current interpretation of traditional Georgian, Jacobethan, Tudor, Spanish colonial, Normandy, and Italian architecture. The Mediterranean strain of eclectic architecture was especially popular in California; Dallas architects interpreted that style and adapted it for Dallas. For decades, Beverly Hills architects have come to Dallas to design homes and Dallas architects have imported ideas from Beverly Hills - no wonder Highland Park feels like Beverly Hills. Both suburbs were designed in the same era by the same New York landscape architect, Wilbur Cook. And, currently, a prominent Beverly Hills architect is designing an equally prominent house in Highland Park on Beverly Drive.

Click here for an introduction on the Eclectic Style. 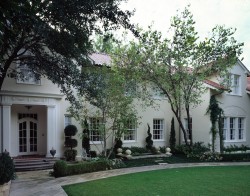 Every Dallas architect working in the eclectic tradition has been influenced by Hal Thomson, the most successful and prolific architect in Dallas in the first part of the century. The red tile roof on Drexel Drive shows the influence of Beverly Hills Mediterranean style on Thomson's design. This house on Drexel was an early inspiration for many Highland Park houses.  See More 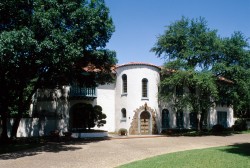 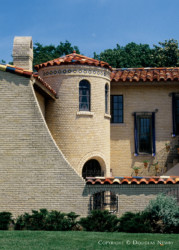 Clifford Hutsell visited the Beverly Hills home of Tom Mix and came back with the parabolic arch, which he added to his idiosyncratic vocabulary of Mediterranean details. The scale and design of the balcony porch and rounded wall entrance of the Lakewood House is very close to the Fooshee and Cheek homes on Beverly. But Hutsell, the anti-modernist, was famous for embellishing his Mediterranean homes with lavish touches of whimsy.  See More 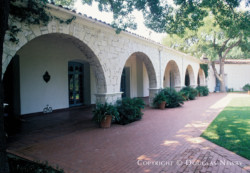 Architects Denman Scott and Burton Schutt were brothers who came from Beverly Hills to build this house for oilman Everett Lee DeGolyer at what is now the Dallas Arboretum. Scott and Schutt specialized in building houses in Beverly Hills. The DeGolyer house with sprawling arches, courtyards and red tile roof is a genuine Beverly Hills Hacienda. As DeGolyer called it, "a Beverly Hills architect's idea of what a Texas oilman would think a Texas hacienda would look like."  See More 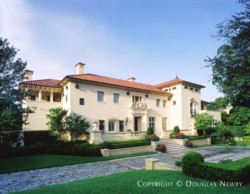 The owners' travels through Tuscany influenced the house designed by architect, Rick Robertson, based in Beverly Hills. Robertson, who originally came from Texas, has a reputation for successfully replicating the scale and detailing of the 1920's and 1930's homes in Beverly Hills. This Beverly Drive mansion blends into the neighborhood because we subconsciously recognize or sense Beverly Hills' architectural legacy in Highland Park.  See More

This regional architecture is based on indigenous houses of Texas. This was a conscious rejection of European Eclecticism. Not only do these houses reflect a simplicity and honesty of form, but the architect's respect for the environment remain Modern architectural themes today. Consistent with the spirit of early Texas settlers, artisans and architects worked hand-in-hand on the site to create houses that were truly Texan. David Williams, the father of this style, traveled extensively in Europe and was an accomplished Eclectic architect, but he drew his inspiration from Texas. His ideas for forms and materials came from early farm and ranch houses that he sketched across the state with his friend, O'Neil Ford. They took the durable and inexpensive standing seam metal roof they saw on rural barns and sheds and put it on sophisticated city houses. They used native limestone or unpainted brick for both interior and exterior surfaces, and they adapted the narrow horizontal country porches to catch the urban breeze. These practical pioneer designs had evolved in response to the bright sun and intense heat of Texas - Williams and Ford used them in designs that evoke a specific regional past.

Click here for an introduction on the Texas Modern Style. 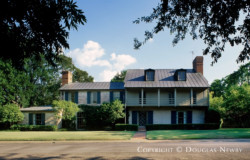 David Williams refined the basic features of the indigenous Texas style in this house. The standing seam metal roof and the ranch style porch are typical of houses built by early Texas settlers. In the same spirit, Williams embellished the house with carvings and handcrafted detailing. The oversize windows and orientation on a site that respects the environment was a necessity for the early settlers. O'Neil Ford did not collaborate on this final home designed by David Williams. However, David Williams considered O'Neil Ford his greatest contribution to architecture for the many projects Ford assisted him with and for the training Williams provided.  See More 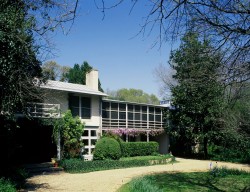 After Williams dissolved his firm, O'Neil Ford opened his own and was joined by his friend, Arch Swank. Together they designed this house on Wendover Road. Williams' house on McFarlin is a formal design in the spirit of t the country, but this Wendover home is considerably more casual, an asymmetrical country house built on several secluded acres in Lakewood. It shares the large windows, screened-in balconies and handcrafted details of the house on McFarlin.  See More 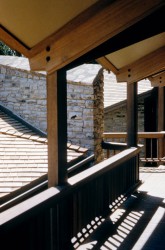 Hal Box worked with O'Neil Ford before joining with James Pratt, who was a student of Ford's when he was a visiting professor at Harvard. Pratt & Box designed this house to accommodate the difficult sunken site. Their solution was a daring and fanciful bridge lined with weathered Texas fence stone which led to the center of the house. From here, visitors descend to the first floor. Exposed bolts and pegs in the unpainted fir and mahogany balconies and porches are reminiscent of Williams and Ford's style.  See More 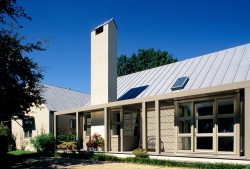 Max Levy worked for Bud Oglesby, who got his start with modernist Arch Swank, O'Neil Ford's one-time partner. In the Glenleigh Court house, Levy embraced the simplicity and honesty of early Texas design, embellishing it stark modern planes with sunlight and shadows cast upon the trellis that serves as a porch roof.  See More 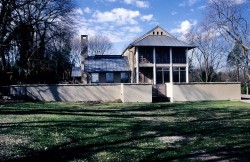 Frank Welch got his start with O'Neil Ford and has remained a Texas regionalist at heart, though some of his houses are emphatically modern. This house on Lawther was inspired by the David Williams house on McFarlin. The balconies were influenced by Ford's balconies at Trinity University in San Antonio, and the egg-crate redwood grid frames of the screened-in side porch were done in the manner of Ford's Wendover house. Still, the greater simplicity and use of light as the primary decoration are distinctly modern.  See More

By the 1930's, the architects working for David Williams were also attracted to the simple, geometric designs, and industrial idiom coming out of Europe. They incorporated these elements using Texas materials. Many Dallas architects have worked in both branches of modernism - European and Texan - and the styles continue to overlap. Architects James Pratt, Max Levy, and Frank Welch have carried on the tradition of Texas Modern which includes indigenous architecture; Dave Braden, Bud Oglesby, E.G. Hamilton, and Lionel Morrison tend to emphasize the geometric shapes and clean surfaces of European Modernism while still incorporating regional materials.

Click here for an introduction on the Modern Style. 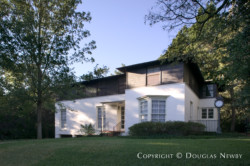 O'Neil Ford's name is synonymous with interpretations of architecture but he was first and foremost a modernist - as was his friend and later partner, Arch Swank. This house is perfectly modern, a rectangle with strong horizontal lines, punctuated by the two-sided pinch bay window that is a departure from the multi-sided rounded bays of eclectic houses.  See More 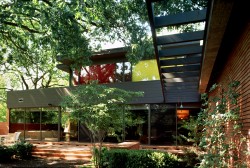 Howard Meyer, an East Coast-educated admirer of both Le Corbusier and Frank Lloyd Wright, worked in Dallas for Washburn and DeWitt. Roscoe DeWitt shortly thereafter joined forces with Arch Swank, to whom most of the modernists are linked. The first house that Meyer designed on his own in 1938 was on Mercedes in East Dallas and is very close in style and scale to O'Neil Ford's Rock Creek home. By 1951, when the house on Nakoma Drive was built, the influence of Frank Lloyd Wright had increased, as well as Meyer's affection for the materials of Texas.  See More 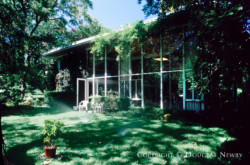 Jim Wiley, a partner of Bud Oglesby, was equally influenced by Walter Gropius' Bauhaus movement. The 48-foot modular shell is a "machine for living" comprised of nine 16-foot cubes. The emphasis is on the concert room, which has 16-foot ceilings and concrete floors. Sliding doors allow privacy for the elevated bedrooms that become balcony spaces for the concert audiences up to 125 people.  See More 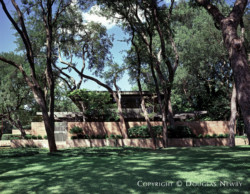 E.G. Hamilton, who worked with Arch Swank, was influenced by Mies van der Rohe's use of an open plan, freestanding walls, and single planes of unadorned material. At Crescent Avenue, the walls defined both the public and private spaces, the interior and exterior courtyards.  See More 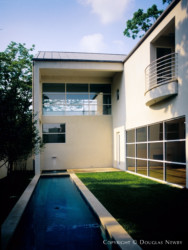 Lionel Morrison worked for E.G. Hamilton and built on Hamilton's inclination for strong, clear design. The Princeton house is a simple rectangle with an enclosed staircase providing a courtyard. Like Mies van der Rohe's famous Barcelona Pavilion, the surfaces of this house are of a single material, clean and elegant.  See More