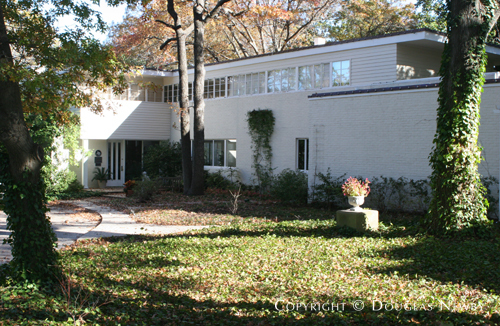 This DeWitt and Washburn architect designed modern home with a flat roof and wide overhangs is now situated on three acres and remains one of the most important and first...  See More on 10 Nonesuch Road, Dallas, Texas

Thoughts on the Contributions of Architect Roscoe DeWitt

Dewitt and Washburn designed the contemporary model home for the Texas Centennial celebration at Fair Park. After the Fair, the home was moved to 6851 Gaston. This 1936 Art Moderne home remains one of four or five in the city also designed in 1936 that exemplify this Art Deco period. This movement was so strong in 1936 that even Maurice Fatio, known for designing some of the country's most extravagant, eclectic estate homes designed a beautifully conceived small Art Moderne home in Palm Beach in 1936.

In 1937, Roscoe DeWitt had the distinction of displacing Frank Lloyd Wright as the architect for the Stanley Marcus home at 10 Nonesuch Road. Stanley Marcus wanted a modern home but he considered Frank Lloyd Wrights' original design a contortion of livable space. Roscoe DeWitt was more accommodating, allowing a library for the thousands of books in the Marcus library. He was also more successful, as Dallas' arbiter of good taste enjoyed this home for 58 years. This Lakewood residence, nestled into six acres, reflected the civilized nature and natural exuberance of Stanley Marcus. The 9,000 square foot home with a flat roof and wide overhangs is now situated on three acres and remains one of the most important and first international style residences in Texas. Roscoe DeWitt worked in partnership with other prominent architects and mentored many of the architects that succeeded him.